Obesity Prevention Strategies presented by Astrakos’ society for public health, in this episode, we will teach you the childhood obesity prevention strategies, and how to secure your family from obesity, and what are the main factors that lead to it.

Usually, the pathway of life course effected often, by many involved factors, such as society, neighborhood, family, the individual, area, the cellular levels, the physiological and psychological aspect, as well as, the social exposures.

Recently life course epidemiologists explain how a father’s social class, in childhood, may affect the biological functions and the development of the adults. That means we must be careful about our children and understand that the bad social exposures, can affect negatively the health of our children, especially in puberty.

According to the world health organization, Everybody, less than 18 years of age, has the right of the child and considered as a child. That was adopted by the convention on the rights of the Child.

Childhood is the primary stage of life. What we eat, and do in childhood, has a big effect on adulthood life. Obesity is not only caused by food, but also by social aspects. Obesity rates have increased dramatically over the world in the last 30 years, the World Health Organization is raising the awareness about overweight, and obesity. Due to the increased number of obesity among children. In 2016, an estimated 42 million children under the age of 5, were overweight, or obese. Almost three-quarters of these, live in Asia and Africa. Overweight and obesity in early childhood, increase the risk for social discrimination, sleep apnea, high cholesterol, high blood pressure, type 2 diabetes, and obesity later in life.

Astrakos report is presenting a comprehensive and integrated package, of recommendations, to guide families to address childhood obesity. To create, healthy eating practices, and habits, to prevent obesity among children worldwide. Here we will summarize some key of actions, that are directed to the parents.

The unhealthy foods are the foods, which are high in saturated fatty acids, trans- fats, and sugar-sweetened beverages, as well as the energy-dense foods, which have lots of calories per serving. The calories may come from protein, fat, or carbohydrates.

Inform your child, about childhood overweight and obesity, and tell l them about, the consequences of that on health and well-being.

Update your health information always, to get an effective prevention guide, of childhood obesity through the consumption of a healthy diet throughout the life course.

Reduce the exposure of children and adolescents, to the power of the marketing of unhealthy foods.

Control the OBESOGENIC ENVIRONMENT, which promotes high energy intake, and sedentary behavior. This includes the foods, that are available, affordable, accessible, and promoted.

Promote the benefits of physical activity.

Provide guidance to children and adolescents, on healthy body size, physical activity, sleep behaviors, and appropriate use of screen-based entertainment.

Pregnancy is a very critical pathway for child obesity. The risk of obesity can be passed from one generation to the next, because, maternal health, can influence fetal development, and the risk of a child becoming obese.

The care, that women receive before during, and after pregnancy, has profound implications for the later health, and development of their children.

Promote a varied diet with all macro and micronutrients.

Ensure that diet and nutrition counseling is included in antenatal care.

Avoid the use of and exposure to tobacco, alcohol, drugs, and other toxins.

Provide guidance on and support for, healthy diet, sleep, and physical activity, in early childhood, to ensure that children grow appropriately, and develop healthy habits.

Including the breastfeeding, for the first six months of life, because breastfeeding is the core for optimizing infant development.

Work on early detection, and management of obesity and its associated complications.

Give psychosocial support. The mental health needs of children who are overweight or obese are crucial, including issues of stigmatization and bullying, need to be given special attention.

Obesity can be increased by, the physical environment, such as proximity to grocery stores, vending machines, and access to school food and drink.

Share with your child the foods that contribute to healthy diets, if it is not consumed in appropriate amounts.

Use social media to provide guidance on and support for a healthy diet. Studies have been shown that social media is a perfect way to influence your child.

As a caregiver, be the con-founder that affects the association, not the mediator.

Consider that adolescents will tend to eat the foods, that are available, affordable, accessible, and promoted.

Improve the availability of mechanisms for purchasing foods from farms.

Plan a physical education at least two times a week.

Stay in touch with the healthcare center.

This was a presentation of the 37 key of actions, of Astrakos alexanders’ report, after reading all these keys, we on astrakos’ society we confirm that motivation is not enough, moving from motivation to actions could help much more. Also, we focus on parents, because parental values could affect the home environment, Parental values stand for the identity, that parents are caring, which usually impacted by personal thoughts and feeling. Furthermore, the perception that family receive from the public sources, selective services and education which include all, such as, internet, books, magazine, TV, and advertisement, as well as when parents, grandparents or friends undermine their rules over the children’s eating 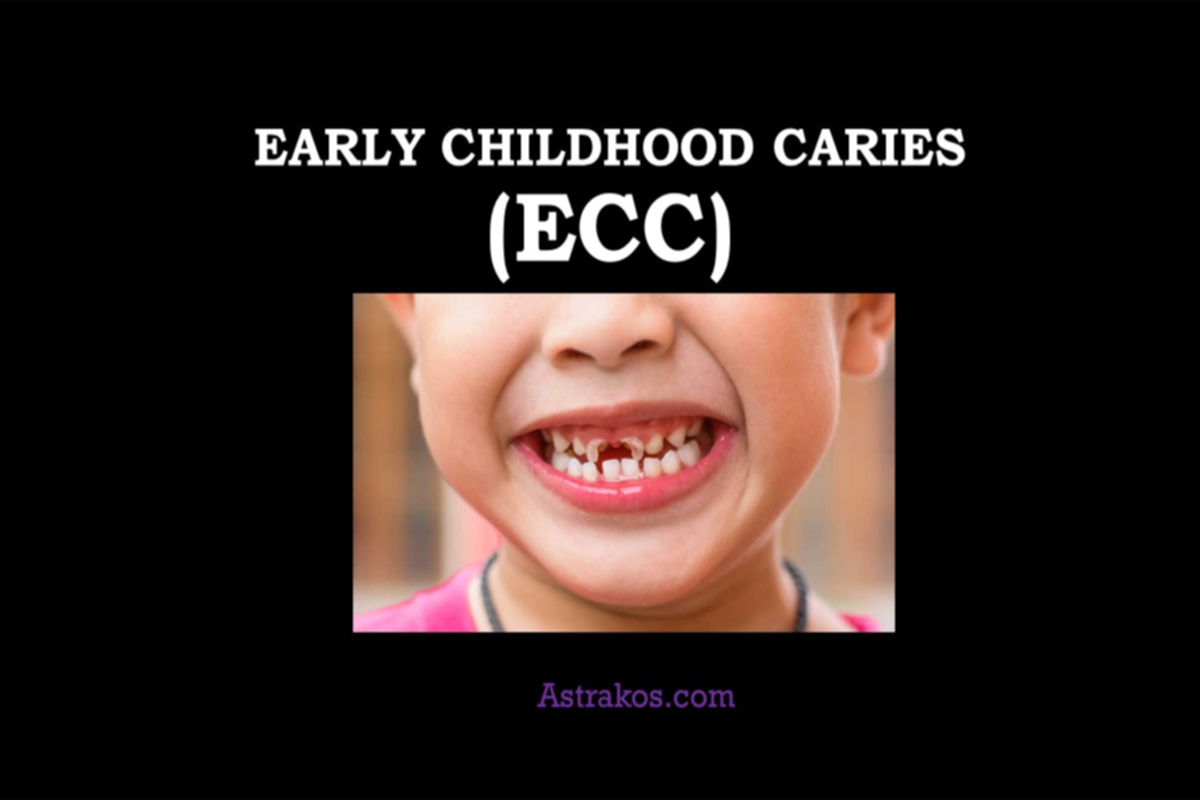 The early childhood caries is a major problem in many countries, especially developing countries. That’s why we conducted a study in order to answer these questions about the prevalence, the risk factors, the prevention, the clinical classification and the etiology as well as the pathogens. Even we will present a list with the dispersion of early childhood caries among the world.

The Development Can Be Categorized As:

Type I (mild to moderate)

The existence of isolated carious lesions involving incisors and/or molars.  The most common causes are a combination of semisolid or solid food and lack of oral hygiene.

Smooth surface lesions (labial-lingual lesions, approximal molar lesions). Caused by inappropriate use of  feeding or at breast-feeding or a combination of both, with or without poor oral hygiene.

Early childhood caries was described as carious lesions affecting almost all teeth including the mandibular incisors. Caused by a combination of cariogenic food substances and poor oral.

The Etiology and Pathogens Of Early Childhood Caries

Which Disciplinary are Involved in The Diagnoses?

What is The Prevalence Rate For The Early Childhood Caries

The prevalence of  early childhood caries, varies with several factors like race, culture, and ethnicity, socioeconomic status, lifestyle, dietary pattern, oral hygiene practices, from country to country and from area to area.

According to a study, the highest prevalence of early childhood caries, is found in the 3- to 4-year-old age group. Moreover, boys are significantly more affected than girls. Another epidemiological study from Europe found that early childhood caries is randomly dispersed in the populations.

The Dispersion of Early Childhood Caries Among The World (Trusted source)

Alexander Astrakos 4 Comments Health GuideNutrition FactsPhysiology FactsPublic Health CariesChild HealthChildhoodChildrenEarly Childhood CariesHigh Sugar DietOral Hygiene
We use cookies to ensure that we give you the best experience on our website. If you continue to use this site we will assume that you are happy with it.OkNo