Eggs yolks is a question for many, “Is Egg Yolk Dangerous for Health?” most people believe that a high consumption of eggs could be dangerous, and the egg yolk could cause cardiovascular diseases (CVD). Recently a new observational study conducted in Canada investigated the relation between egg consumption and dietary cholesterol as well as the risk for cardiovascular diseases. The study suggests that the consumption of 6 to 12 eggs per week, have no effect on CVD risk factors and the consumption of 6 to 12 eggs per week had no impact on plasma concentrations of total cholesterol, low-density lipoprotein-cholesterol, or triglycerides.

Richard et al. continue that the recommendation is not only for healthy individuals but also for individuals who are at risk for developing diabetes or with type 2 diabetes because the study population who included were diabetic vs. insulin resistant and metabolic syndrome.

The yolk contains 75% of an egg’s calories. The yolk contains proteins, fats minerals, and vitamins. These nutrients must come from somewhere in order to obtain them. Usually, the hens obtain them from different sources and these sources specify the nutrients that will be included in the egg and specify also the mystery of the different yolk colors. Do you remember now why people say a famous proverb in the nutrition world “you are what you eat”. Moreover, the combination of the nutrients is a primary factor for the increasing or reduction of egg yolk cholesterol concentration. (Trusted Source).

Why Eggs Have Different Colours?

Orange yolk or yellow yolk? What accounts for these differences? From yellow to gold, the color differs from the nutrients. Therefore, what a chicken eats has an incredible influence on the composition of the eggs she lays. What are matters here is not the color, because the chickens that eat plants with a higher concentration of certain pigments tend to produce egg yolks with a deep orange color. These eggs are not more nutritious than eggs with a pale-yellow yolk. What matters here is the other components such as minerals and vitamins which can be differed by the source the hens are eating from. That is hard to identify by vision. As we mention in one of the previous articles that the soil is the most important factor accounting the nutrients, especially in the egg. There is an interesting study for ( Kim et al trusted source) they found that the egg yolk color was most yellow for hens fed the control diet (no fat), but the least for hens fed diets containing 4.0% soya oil. However, the inclusion of supplemental fat in diets decreases egg yolk yellowness. If you want to know how to chose an egg with low cholesterol to contact us here Book Now

Why Eggshell Thickness Differs Between Eggs?

Eggshells thickness differs according to the feeding process Kim et al investigate the effect of different sources and inclusion levels of dietary fat such as adding animal fat and or soybean oil on productive performance and egg quality in laying hens raised under hot environmental conditions. There they found that the body weight was greatest for those who eat animals’ fat than for those fed the control diet (no fat) or diets containing 2.0% or 4.0% Soya oil. Moreover, nutrition affects eggshell thickness and yolk color. The eggshell was the greatest for hens fed the control diet (no fat), but the least for hens fed diets containing 4.0% Soya oil.

The double yolked eggs can’t hatch easily that’s why these eggs are considered as a loss to overall commercial hatcheries.

The yolk fertility rate is low due to their smaller yolk size.

The lack of space to move compared to single-yolked eggs.

Usually it is cheap in Europe but not in China.

How To Identify The Double Yolked Egg?

The traditional method for the identification of double-yolked egg is using “candling”. There two rounded grey shadows will be visible, by sending light through the double-yolked egg. But that method is not used anymore. Due to the new computer vision technology. This technology has been successfully applied to the identification of animal products. The correct recognition rate by using a computer vision system is over 95%. Don’t look at the size of the eggs, because double-yolked eggs are similar in size to the single yolked eggs. 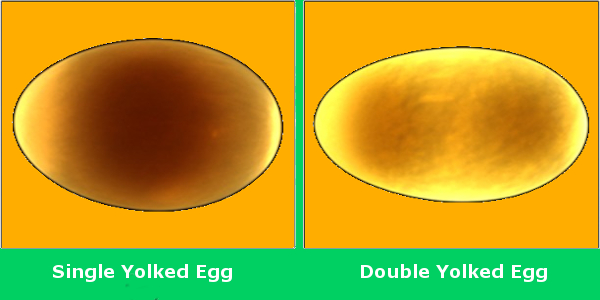 6 thoughts on “The Egg Yolk From Yellow To Gold”